King Boletes are one of the great mushrooms of the fungi world.  They are great in soup, stews, stir-fry, and many others.  You can use them fresh or dried.   If you dry them the flavor gets even earthier then if you eat them fresh. Some people describe the taste as nutty but I prefer to call them earthy.  I can go on and on about how good these are to eat. These are one of the largest mushrooms that you will find. Even a small one is a meal all of its own.  A large one will be close to the size of a football.

The Boletus Edulis or King Bolete is a very large mushroom that is very easy to identify. The Season from September through to a hard frost typically. I have seen them all the way through spring. Once you see one you will never forget them. The cap is convex or bun shaped, reddish brown to yellow brown. The under cap pore is very sponge like, white when young, then yellowish brown to green as it matures.  Lookalikes include some Leccinum species which can be ruled out by black scales on the stem, along with staining blackish grey, reddish or other colors when they are cut in half after several minutes. Leccinum species are usually found in Aspen or birch groves. The King Bolete Mushroom will stay white when cut in half. 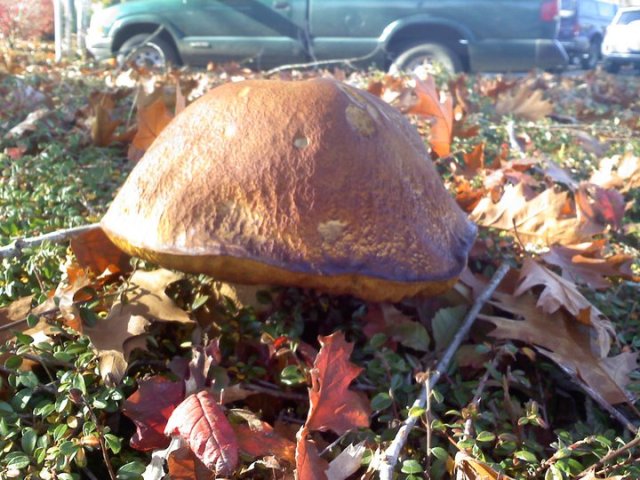 The fungus grows in deciduous and coniferous forests and tree plantations, forming symbiotic ectomycorrhizal associations with living trees by enveloping the tree’s underground roots with sheaths of fungal tissue. The fungus produces spore-bearing fruit bodies above ground in summer and autumn. The fruit body has a large brown cap which on occasion can reach 14 inches in diameter and 6+ pounds in weight. Like other Boletes, it has tubes extending downward from the underside of the cap, rather than gills; spores escape at maturity through the tube openings, or pores. The pore surface of the B. edulis fruit body is whitish when young, but ages to a greenish-yellow. The stout stipe, or stem, is white or yellowish in color, up to 10 in tall and 4 inches thick, and partially covered with a raised network pattern, or reticulations. King Boletes can grow singly or in small clusters of two or three mushrooms. The mushroom’s habitat consists of areas dominated by pine, spruce, hemlock, and fir trees, although other hosts include chestnut, chinquapin, beech, and oak. In California, porcini have been collected in a variety of forests, such as coastal forests, dry interior oak forests and savannas and interior high-elevation mixed forests, to an altitude of 3,500 m (11,500 ft). I have seen them growing all the way up the lava flows along the top of the cascades and into central Oregon by Crane Prairie and Wickiup Reservoirs.  It is odd seeing them over in the dry areas over there.

The one thing that you have to watch for when picking King Boletes is that they can sometimes get infested with maggots from the fungus gnat.   Mostly you will only find them buggy early in the season.  As it gets colder it is rare to see them infested.